LASIK is an abbreviation from the Latin “laser in situ keratomileusis”, which means “ablation using a laser for the internal corneal tissue”-this process precisely is performed during the operation by using the LASIK method.

The LASIK method is scientifically known and applied to correct visual defects since 1990 and is considered as the most used method of laser surgery. A confirmation of this fact is that this method was accepted for treatment of astronauts with NASA and American Navy jet pilots.

The newest development in this process is Femto-LASIK. With this innovative Femto-LASIK method, the mechanical incision of the cornea was replaced with the femtosecond laser.

Course of the operation

With the LASIK method, a microkeratome (scalpel) incision is made on the cornea by a micro-precision knife. An ultra-thin fold (also called a flap) is carefully made, and then the inner cornea is corrected by an excimer laser and fashioned newly in this way, so that the focus will be optimally arranged on the retina. Then the flap is restored and the cornea heals in a few days.

The mechanical method of LASIK, which uses the scalpel to make the flap, is seldom still used due to safety. The more modern Femto-LASIK makes the incision by laser, instead of a knife, and has become our standard practice. 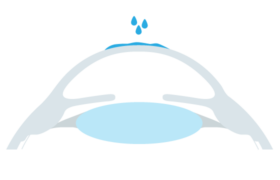 Prior to the start of the procedure, the area of the face is completely disinfected. Then we give anesthesia in the form of drops to the eye, and immobilize the eyelids. During the procedure, we ask the patient to gaze at a blinking light. 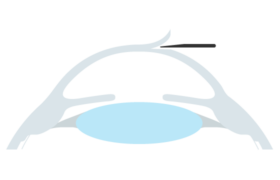 In the first stage of the procedure, the surgeon will use a micro-precision scalpel to make the incision on the cornea, making a thin flap of about .1mm in width. At this time the patient may feel pressure on the eye and see darkness for a brief moment. 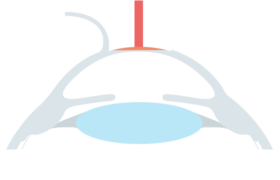 Correction with an excimer laser

The exposed cornea will be fashioned by a computer-controlled laser in a few seconds. It is completely pain free. The patient may hear the sound of the laser and eventually smell the cornea. The surgeon performing the procedure will have control of the laser throughout the process through the use of a microscope 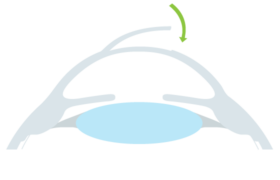 Completion of the procedure

In the final stage of the procedure, the flap previously created will be returned to its place. For safety throughout the operation the surgeon will place on the patient’s eyes contact lenses with high oxygen permeability. These are removed the day following the procedure.

Sign up for a casual visit and consultation where you'll learn how we can improve your eyesight.

Preparation for the operation

The first preparatory step is the disinfecting and decontamination of the face by a special product. Next the patient receives local anesthesia (eye drops). The eyelids are immobilized. The complete treatment is totally pain free. During the operation, the patient is asked to gaze at a green light above them. Using a micro-precision scalpel (microkeratome), the surgeon makes the incision in the cornea, creates the flap of about .1mm in width. It is carefully folded back. The patient may feel a light pressure on the eye and see darkness for a moment.

During the procedural method of classic LASIK, the surgeon uses an excimer laser. The computer-controlled laser reveals the cornea, which will be fashioned to correct the visual deficiency. The patient will not feel the process except for hearing the sound of the laser. The surgeon will have control of the laser the whole time by using a microscope.

During the final step, the flap is folded back. The flap will self-adhere and provide safety. For protection against external factors, contact lenses with high oxygen permeability are placed upon the eyes and will be removed the following day.

The patient will immediately following the surgery see an improvement in his vision though the eyes will need protection throughout the rest of the day. It is important to remember that the incised flap may cause eye discomfort during the initial days. The cornea’s regeneration will last from a few days to a few weeks.